As the semester is comming to an end, I am trying to make connections between various chapters in Inorganic Chemistry by Miessler and Tarr. I have arrived at the following concept map and would like your input for further refinement. 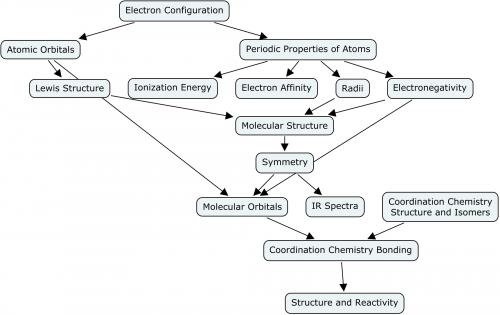 I've never been much of a concept map kind of person.... which is strange because I am a very visaul learner.  I guess I never really understood the point. I'd love it if people could chime in on what the point is; why a concept map would be useful, what it would used.

Is each balloon a chapter?  or a part of a chapter?  Or are they just topics? I don't have M&T anywhere near me right now. If they are chapters, could you add chapter numbers to the graphic?

I am not much of a concept map person, either, but I just finished teaching with M&T this semester.  A few topics that I covered (at least briefly) this year that aren't on the map are solids (band theory), HSAB, and electronic spectra (T-S diagrams).  The only other comment I have is that perhaps there should be an arrow from coord. chem structure and isomers to symmetry - just like there is from molecular structure to symmetry.

I thought this might work well with Maggie Geselbracht's first day Orbital assignment.   In this assignment students write down everything they know about orbitals.

There is an organization that has a nice mapping tool called cmaptool I think.  It is free to play with.  (http://cmap.ihmc.us/)

I had this cool idea about concept maps after watching a presentation on student-designed web sites.

The presenters used a tool that mapped the hyperlinks on the student sites. You've probably seen these spider web-like maps before. They could capture the increasing complexity of the site over time, as the students were developing them and adding links.

One perceptive audience member remarked: "But is the number of links really important? Wouldn't it be more telling to know WHY students put the links there?"

That's when I thought it would be really cool to treat the site like a giant concept map and use a "hover pop-up" for students to explain WHY they put the link there. In concept maps, the linking term (the word in the arrow) specifies the relationship between the two concepts. Web sites are not concept maps, but I hope you can see the analogy. The hover pop-up could contain a lengthier phrase or sentence that explains the connection between the two pages or WHY the user might want to click.

This is interesting to me because it could serve as a window into students' "integrative thinking." How do they connect ideas and do they connect them in novel or creative ways?

It is, of course, a grading nightmare. But that doesn't mean it isn't an interesting idea.

I know it's been a little while, but I wanted to let you know that I think your concept map (above) is great.

For example, could you say ELECTRON CONFIGURATION "can explain" PERIODIC PROPERTIES OF ATOMS? Or would you connect them differently?

I've been teaching from Miessler and Tarr for a while and this was the first semester where the concepts seemed to really interconnect throughout the semester (in my mind...I won't speak for my students). I'm not sure I could remember some of the those connections for a concept map. But it makes me want to pay more attention next time I teach.

Thank you for the great feedback. I have been conveying my  teaching philosophy to students utilizing graphical techniques, such as concept maps, flow charts, etc... Below is a sample I give to students for Inorganic Chemistry Lab. 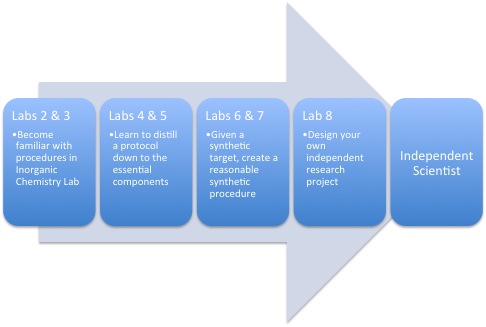 Currently, I am in the middle of finals week and will answer and update your questions as soon as possible.